"So what's the job? An ad? Something for school?" All three girls lean forward. All three girls looked over their shoulder, back at me, then whispered: "We want you to break someone's heart." 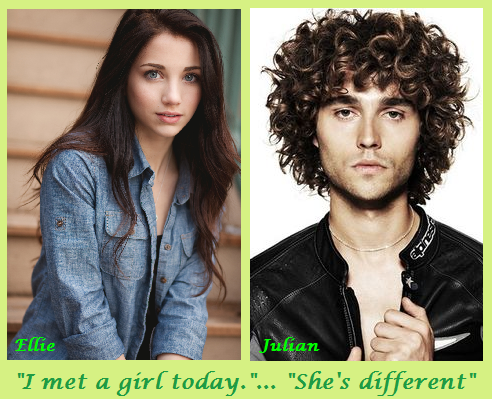 Thats how Ellie get's roped into this and how the story really begins. She's not had an easy life and is need of serious money when she decides to take te job. It reminded me a lot of John Tucker must die for the first few chapters. But it's really not. This book is a bit of a wolf in sheep clothes. I was expecting a sweet fluffly romance novel like for example the love game by Emma Hart (Review). Instead, what you get is a story about two very broken people - one more broken than the other - who find each other and make each other better.

Characters
Ellie was an interesting character with an interesting background. She's down to earth and unsure of herself. She takes the job because she needs the money. It's very obvious from the start that she'll fall in love with Julian (aside from it being said in the blurb). I mostly liked her, but she just didn't really feel like a normal person to me. She seemed like she could only live in this world created by Theresa Weir. I had a hard time connecting to her and I was glad when the chapters from Julian's POV came around. I liked Julian. He's hard a hard life and I liked following his story. I haven't read too many books where the guy is one with the most baggage and it was interesting to read about. Though, like with Ellie, I wasn't in love with him as a character either.

""Once I realized I couldn't quit thinking about him, and once I realized I had a major crush on a guy who had sex with girls and then discarded them, I wanted out. I wanted to meet him with my real self so I could have sex and be discarded. No, wait""

Why 3 stars?
I think the biggest problem I had with the book is that it deals with serious issues, but it somehow never really got up close and personal with these characters. You watch them go through this little love story of theirs and I don't really feel connected to them or their story. It keeps feeling like you're looking through a window at them, but you're not right there with them. That takes a bit chunk out of my emotional response to this book and makes it hard for me to love it. Another thing that I wasn't too thrilled about is the speed in the novel. Some things seem very rushed and you jump from one thing to the next. In some books that works, but I feel like this book would benefit from a little more pacing and slowing down. I personally love a little build up to certain events, but that doesn't really happen in this book. I think it's the least angsty book I've read in this genre. Also the ending felt a bit rushed, but you'll have to read it for yourself to find out :).

Overall
I did enjoy reading this book and I liked it. It just never took it over the hill and made me love it. That's not to say that you won't. I think you'll really like this book if you're intested in characters who are damaged goods, a fast pace, difficult topics and little romance.